I learned something that I already knew but never knew when I read the book, “Make the Big Time Where You Are“, by legendary football coach, Frosty Westering. He called attention to the often-overlooked, magical third side of any and all coins.

A coin is nothing more than a squashed cylinder. It has two circular faces we call heads and tails, but it also has some thickness that becomes the third side. THE EDGE! Coach Westering would use the analogy of the coin to explain how the edge is used to go from “doing your best” to “being the best”, but we’re going to borrow it for a slightly different purpose. 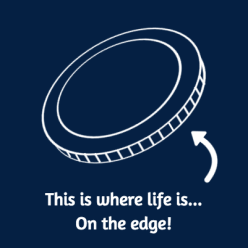 Imagine you and your brother are flipping a coin to see who gets the last dinner roll. Picking heads, you’ve predetermined that one side of the coin is success, while the other is embarrassing failure. As it floats in the sky, moving slowly through its parabolic arch, you salivate thinking about the melted butter on that last roll. And in this moment, the coin becomes kind of like Schrödinger’s cat’s coin, existing in a state of heads and tails at the same time. Both success and failure.

But let’s remove more variables here and not flip the coin in the air. You and your brother decide to stand the coin on its edge, and when it falls, whomever’s side is up, they get the roll.

The coin balances on its edge like an Olympic gymnast on the balance beam, and it sits. Here we are, like with the coin flying through the air, perched between success and failure, and it all rests on the edge.

There are all kinds of things you can do when the coin is resting on the edge to encourage it to fall your way. You could blow on it, tap the table, try to create some distinct movement in your favor. But why?

When the coin is on its edge, there is still a chance for victory.

Life, my friends, is a coin on the edge. You are constantly between success and failure everyday and the worst thing we can do is sit idly by and watch others take our dinner rolls.

This is just like the prototype that we want to test with our early adopters. Every prototype (no matter how ugly, how duct-taped together, or how functionality barren) has a chance of success. You’re setting your success metrics early and you know if you epically fail, at least you’re failing forward and learning. You let your prototypes live on the edge of the coin, why not you?

If you felt you had control over your success, wouldn’t you tap the table, scoot your chair, do anything you could to create enough movement to have the coin fall in your favor? Yes you would. So stop feeling like success or failure is written in the stars, or the deal of a deck of cards. Life is a coin on the edge, and you have to power to make it fall your way.

Go forth and be edgy!